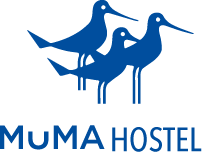 The sea, all around, offers unforgettable days. When the mistral blows you can benefit from the east coast, from Portixeddu to Capo Sperone passing by Maladroxia, Coequaddus and Turri, while with the east it is better to turn west towards Calasetta, the other municipality of the island.

If the sea is your passion, live the experience of crossing it with one of the many canoes made available by the Sailors of Italy sailing centre, or on board the fishermen’s boats, at dawn, to learn techniques and secrets to the smell of salt.

Let our environmental hiking guide accompany you to visit the Santa Caterina lagoon and the Sant’Antioco salt pans. Here you can discover the peculiarities of the flora and fauna and give yourself to birdwatching grey herons, cormorants, pink flamingos and many others.

To book a guided walk ask for information at the MuMA Hostel reception.

From circa 2500 BC, as attested by the thirty or so nuraghi present in the territory, there have been Phoenician, Carthaginian, Roman, Pisan, Aragonese, French and even pirates, and of all, Sant’Antioco, keeps track. Some of these are visible at the Ferruccio Barreca Archaeological Museum (Mab): the historical-cultural route through the various ages – from the nuragic to the Roman age – is a rich collection of commonly used funerary objects, memorabilia and jewels found on the island. Particular attention is given to the testimonies of the oldest Phoenician centre so far found in Sardinia, Sulki (ancient name of Sant’Antioco), including the Phoenician Tophet, which can be visited in Via Tanit, a sanctuary dedicated to the burial of dead children prematurely or never born. Another important testimony not to be missed is the Punic Hypogeum Village, in via Necropoli, one of the most important in the Mediterranean for the architectural richness and the numerous finds found (info and reservations www.archeotur.it).

At the highest point of the residential centre you can admire the Basilica , dedicated to the martyr and patron saint of Sardinia, Sant’Antioco : Byzantine architecture, neo-baroque façade, positioned over the only early Christian catacombs present in Sardinia. Twice a year, in spring and summer, Sant’Antioco is celebrated by folk groups and families from all over Sardinia; his death is commemorated on 13th November.
The most recent past is represented by the Ethnographic Museum , in via Necropoli: the tools used by the agro-pastoral and seafaring society of Sulcis are exhibited in an 18th century warehouse.

This site uses cookies, including third parties, to send you advertising and services in line with your preferences. If you want to learn more or opt out of all or some cookies click here . By closing this banner, scrolling this page or by clicking any of its elements consent to the use of cookies. Ok